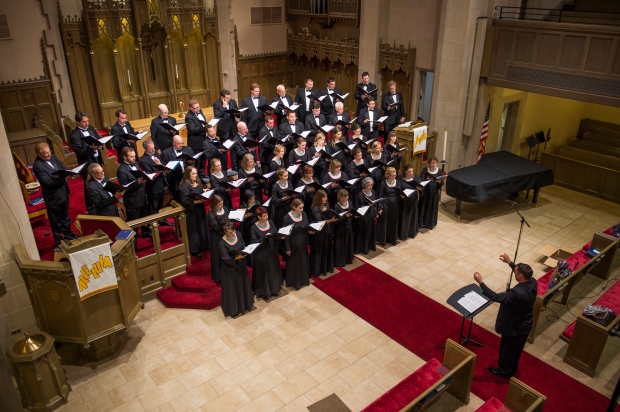 Performing the last of their three sold-out performances of the holiday season, Kantorei brought the audience to its feet at the Lone Tree Arts Center on December 19. A Kantorei Christmas featured a stellar performance by the 50-singer chorus coupled with instrumentals on harp, percussion, string bass, and piano.

Kantorei, an a capella group of international renown, opened its first set with “Come Let Us Adore Him” a traditional carol performed with a medieval drumbeat that reminded the audience of ancient times and the birth of Christ. The chorus transitioned into “God Rest Ye Merry Gentleman” and “Still, Still Night” as well as a few other Christmas carols produced with a musical twist by composer Jackson Berkey, one of the founders of Manheim Steamroller.

The evening featured several elegant harp solos and accompaniment with the chorus by Janet Kay Harriman, who performs with Opera Colorado and the Central City Opera Festival. The full-bodied warmth of Harriman’s performance of “Asleep in My Arms” evoked the austere beauty of the Christmas season. “Long Expected Jesus” opened with the delicate tones of the harp, the rise of the voices of the sopranos and altos, and became interwoven with the tenor and basses to produce a swell of sound that was ethereal in nature.

The audience was treated to My Perfect Stranger, a composition by Bob Chilcott, which was originally performed by the BBC Singers in 2016, and presented only two other times in the United States. My Perfect Stranger is a poetic retelling of the nativity story that raises the question of what is our role in the Christ story and what part do we play in welcoming others into our lives. Christianna Sullins performed a magnificent solo as Mary and the piece featured dazzling solos by other Kantorei members as the Innkeeper, the angels, the wise men, and even Herod.

The peacefulness of the nativity story was followed by rousing renditions of “Carol of the Bells,” “Sleigh Ride,” and “Sing We Now of Christmas.” However, it was Kantorei’s “Silent Night” sung with the members of the audience that reminded us that Christmas is a season of community, of reaching out to others and celebrating all that is good in this world.

Kantorei, led by artistic director Joel Rinsema, includes more than 50 volunteers, who sing in the chorus as well as serve as teachers, musicians, and conductors in their communities. In 2018, Naxos Records will produce Kantorei’s work with Norwegian composer Kim Andre Arnesen. For more information about Kantorei, visit their website at www.kantorei.com.

The Lone Tree Arts Center hosts professional theatrical and musical performances all year long. In 2018, Ben Vereen, PostSecret, and the Moscow Festival Ballet as well as many other entertainers will bring performances to the Denver area. For more information, visit their website at www.LoneTreeArtsCenter.org.