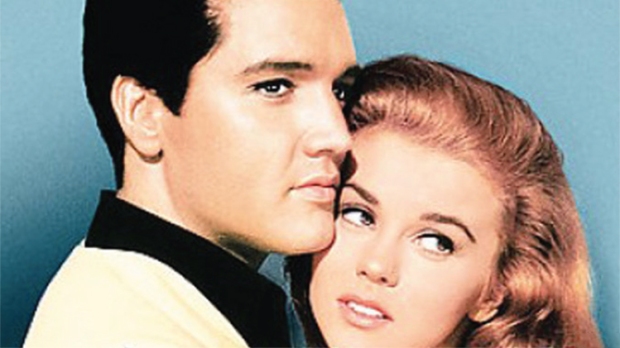 Viva Las Vegas is a wildly-entertaining movie featuring some amazing high-energy song and dance numbers performed by Elvis Presley and Ann-Margaret. The story line is cute and corny at the same time. It is a story of a boy falling in love with a girl in the coolest city in the world.

The movie is about a romantic triangle involving Lucky Jackson (Elvis Presley), Rusty Martin (Ann-Margaret) and Count Elmo Mancini (Cesare Danova). Lucky must compete with the suave and debonair Count Mancini in winning the race and winning the heart of Rusty Martin.

Lucky Jackson arrives in Las Vegas to race in the Grand Prix. First Lucky needs to buy a new engine for his race car before the big race. While in the garage at the race track Lucky and Count Mancini are under the count’s car looking at mechanical things when in walks Rusty Martin in short white shorts. Both men are smitten with her. Rusty leaves before they can find out her name. The two men spend the night trying to track her down.

The two men find Rusty at the swimming pool where she works as a swimming instructor. Lucky and Rusty perform in a cat and mouse singing duo at the swimming pool. At the end of the song Rusty pushes Lucky into the pool. The money that Lucky made to purchase his new engine falls out of his pocket when he lands in the water.

Now Lucky must find another way to earn the cash he needs for his new engine. He finds a job as a waiter at the same hotel where Rusty is employed. Lucky spends a great deal of time trying to win Rusty’s heart and very little time working as a waiter.

The couple share several fun outings during their budding relationship. They dance and sing on the stage and gymnasium at the University of Nevada, Las Vegas. They go water skiing, fly over Hoover Dam in a helicopter, they go Skeet Shooting at the Sahara Hotel, and go on a motorcycle ride performing various stunts.

The film ends with Lucky winning the race and the girl. Their wedding takes place at the Little Church of the West, which is a famous wedding chapel in Las Vegas listed on the U.S. National Registry of Historical Places as the oldest existing structure on the Las Vegas Strip.

It is said that Elvis and Ann-Margaret had a wild love affair while making the movie. The chemistry is evident between the two of them. This attraction to each other is what makes the movie so enjoyable.

The movie is fun, light and breezy. Good clean fun. It is a must see movie for Elvis fans or anyone just wanting to be thoroughly entertained.

After enjoying the movie, the Lone Tree Arts Center provided refreshments of peanut butter and bacon sandwiches. This was one of Elvis Presley’s favorite snacks. Meatballs, mini burgers, and a variety of desserts were also available.

Other activities included Elvis impersonators, an Elvis look-alike contest with Elvis himself acting as the judge. There was a photo booth with wild and crazy costumes and props. Every guest was provided with $500 dollars of play money to gamble with. There were several casino games available for those who felt lucky. The night ended with Elvis singing old Elvis songs. It was a great way to spend the evening.