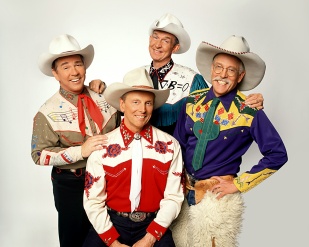 On a cold, windy January night on the Colorado range, the Riders In The Sky brought their funny musical tribute to the Wild West to the Lone Tree Arts Center. My mom and I were excited to see them perform the songs made famous by her childhood favorite Roy Rogers and The Sons of the Pioneers. We were not disappointed.

The Riders In The Sky are a group of four very talented musicians including guitarist Ranger Doug the “Governor of the Great State of Rhythm,” fiddler Woody Paul the “King of the Cowboy Fiddlers,” and accordionist Joey who is “The CowPolka King.”  Standing in for bassist Too Slim was Blake Macklemore, who seamlessly picked up on the songs and jokes despite having joined the night before. The band’s playful ribbing about their age reminds you that they have been together for over 40 years.  They are perennial favorites on the state fair circuit and have won a Grammy for their album Woody’s Round Up from Disney’s Toy Story 2.

The show opened with scenes from The Roy Rogers Show including sidekick Gabby Hays, cowgirl Dale Evans, and of course, Roy riding his horse, Trigger. As the lights came up, Riders In The Sky appeared dressed in colorful Western shirts, lighting their cellophane flame on the campfire surrounded by toy armadillos and cacti.  Proclaiming, “In a logical world, men would ride side saddle,” the first set featured a variety of cowboy standards.  Ranger Doug awed us with his impressive yodeling skills, hitting the high notes yet singing with a smooth baritone voice. “Sky Ball Paint” featuring the “Lone Tree Yodel” brought out whoops from the crowd. Sprinkling the set with witty comments and silly jokes, the band invited us to sing along to “Don’t Fence Me In” and “You Are My Sunshine.” The set lighting turned red like the hot desert sun when the band sang “Cool Water,” a favorite of The Sons of the Pioneers. Joey drew lighthearted dirty looks from his bandmates when he threw in a “Diet Pepsi” in place of the “water” echo.

The second set included “Blue Shadows on the Trail” from the 1948 Disney cartoon “Melody Time,” sung complete with wind and howling coyotes.

Woody showed off his various cowboy talents.  As a member of the National Fiddler Hall of Fame (per Ranger Doug, in the “living” category), he dazzled us with his fast fiddling and dancing skills.  Schooling us on the difference between “Country” and “Western” styles of music (“Country” means you take the mike out of the stand), he got down on his knees at center stage, swinging his hips to “You’re Wearing Out Your Welcome  Matt,” an ode to Gunsmoke’s Matt Dillon and Miss Kitty. After jumping off the stage to high-five with the audience, he went on to show off his lassoing skills. Claiming all of his mistakes are real and not rehearsed, he performed the donut trick as a “favorite of the Lone Tree Police.”

Taking a break from the cowboy tunes, local saxophonist Eric Stehle joined the band for a rousing rendition of jazz standard “Sweet Georgia Brown.”  Featuring a solo by each of the five musicians, the group showed off the depth of their musical talents and was a fun change.

The band rounded out the show with audience requests including Tex Ritter’s “Blood on the Saddle” and perennial favorite “Ghost Riders in the Sky.” Ending on a perfect note with another audience sing-along to “Happy Trails to You” and the sage advice to “never drink downstream from the herd,” the band road off into the sunset. Riders In The Sky, a fun and talented group of entertainers, warmed up a cold night on the range with a performance that my mom and I were glad we didn’t miss.