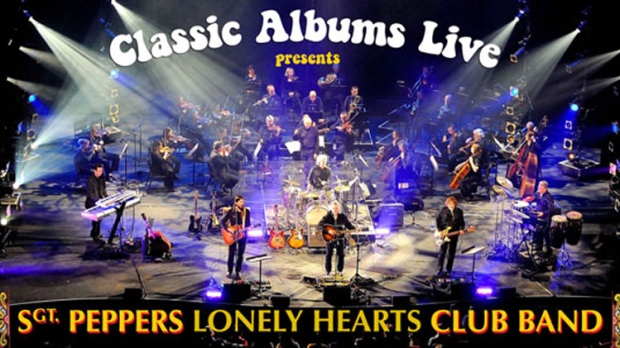 SIT BACK AND ENJOY THE SHOW WITH SGT. PEPPER’S LONELY HEARTS CLUB BAND!

The Lone Tree Arts Center will revisit the genius of the Beatles and the music that defined an era with Classic Albums Live: Sgt. Pepper’s Lonely Hearts Club Band on Saturday, January 19 at 8:00 and Sunday, January 20 at 7:00 p.m.

Craig Martin, founder of Classic Albums Live, brings a sixteen-piece band of outstanding musicians who will perform one of the most complex and profound masterpieces in rock and roll history. Every note performed as if you were back in the recording studio with the Beatles in 1967. More importantly, this is not a 60s tribute band type of performance with costumes and performers that look like the Beatles, rather it is a group of extraordinary, professional musicians who bring the album to life as it was intended to be heard.

Fifty-two years after its release, Sgt. Pepper’s Lonely Hearts Club Band still resonates as one of the most popular and influential albums of all time with hits like:  “Lucy in the Sky with Diamonds,” “When I’m Sixty-Four,” “She’s Leaving Home,” “With a Little Help from My Friends” and “A Day in the Life” as well as George Harrison’s experimental “Within You and Without You” and the title cut “Sgt. Pepper’s Lonely Hearts Club Band.”  The Classic Albums Live musicians replicate the singing, the brass, the guitars, the sitars, and the drums with utter fidelity to the original experience.

Sgt. Pepper’s Lonely Hearts Club Band sealed the Beatles’ legacy in music history for decades to come. Join the Lone Tree Art Center as it celebrates the Beatles and the timelessness of this brilliant album in concert. Seats are going fast. Tickets are $32 to $45 and can be purchased online at www.lonetreeartscenter.org. The Lone Tree Arts Center is located at 10075 Commons Street in Lone Tree. Free on-site parking is available.