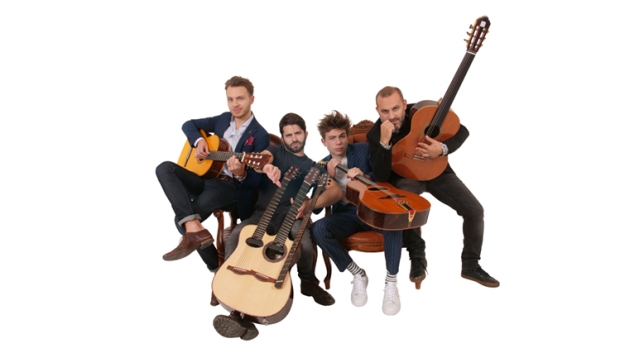 Last Friday, International Guitar Night made its only Colorado stop for its 2019 tour at the Lone Tree Arts Center. The sold-out crowd was treated to a guitar extravaganza featuring four accomplished guitarists: Luca Stricagnoli, Antoine Boyer, Samuelito, and Cenk Erdogan.

Stricagnoli runs on stage, picks up a guitar, and starts playing. His music is his introduction. Playing a mix of original songs and covers, he has excellent stage presence. He doesn’t just play a simple acoustic guitar, he also plays a guitar with three fingerboards. Not just a showman, Stricagnoli is also the evenings host.

Antoine Boyer gets his solo moment next. The 22 year old gypsy jazz guitarist from France also begins his set by playing. He explains to the crowd how he likes to play with the harmony of famous songs and then punctuates his explanation with his playing. He dazzles with a cover of The Sound of Silence.

Samuel Rouesnel, stage name Samuelito, is a Flamenco guitarist from France. Both a composer and player, Samuelito began with classical guitar at age seven. He plays several songs by Paco de Lucia, a Flamenco virtuoso and a great inspiration to Samuelito.

From Turkey is Cenk Erdogan and his fretless guitar. He introduces himself with an original composition. He explains the fretless guitar and its range of sounds and tones. Erdogan has played and taught around the world. It shows through his ease with communicating with the audience and improvising as he plays. His music is beautiful and my personal favorite of the evening.

All the performers have the opportunity to showcase their skill and I appreciate that they all talk about themselves and their influences. They are all engaging and humorous storytellers.

International Guitar Night is known for rotating through only the best of the best guitarists and  highlighting each individual artist, but they also celebrate their skills through collaboration. After the solos come the duets and final quartet performance. These range from a raucous cover of “Another One Bites the Dust,” to beautiful ballads and fun pop culture references.

International Guitar Night tours annually highlighting new and fabulous talent. Keep your eyes open for their next tour and hopefully their next trip through Colorado. For samples of each musician visit https://internationalguitarnight.com