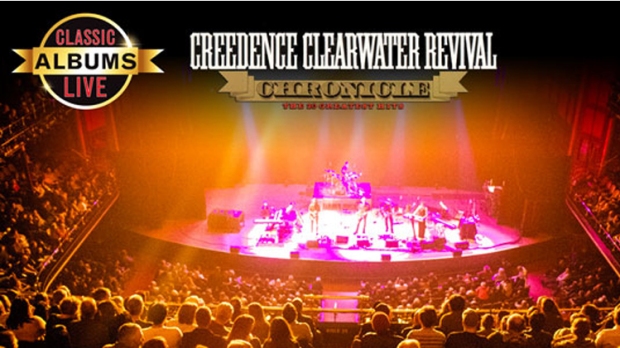 The Classic Albums Lives concert series was founded in 2003 in Toronto, Ontario by a musician named Craig Martin, who previously produced a series of boutique cabaret shows, including composing music for television and stage. Classic Albums live is a concert series in which musicians perform a classic rock album in its entirety and play each song in its perfection.

Creedence Clearwater Revival (often called CCR) was one of America’s greatest bands.  The music of CCR reached across generations with their mix of “blues” and “rock and roll. ” Remember “Down on the Corner,” “Bad Moon Rising,” and “Who’ll Stop the Rain”? You can hear these classics and much more when you come to see Classic Albums Live on Saturday, May 11, 2019 at the Lone Tree Arts Center.

Before CCR, John Fogerty, lead vocalist, lead guitarist and primary songwriter, joined his brother Tom Fogerty rhythm guitarist, Stu Cook, bass and drummer Doug Clifford in 1959 and formed the band The Blue Velvets. They were later called the Golliwogs. Their musical style encompassed roots rock, swamp rock, and blues rock. They played in a Southern rock style, despite their San Francisco Bay Area origin, with lyrics about bayous, catfish, the Mississippi River, and other popular elements of Southern United States.  They also wrote and sang political and socially conscious topics including the Vietnam War.

The band performed at the 1969 Woodstock Festival in Upstate New York.  CCR was inducted in the Rock and Roll Hall of Fame in 1993.  Creedence Clearwater Revival’s music is still a staple of US radio airplay; the band has sold 28 million records in the United States alone. Rolling Stone ranked them 82nd on its 100 Greatest Artists of All Time.

The talented musicians of Classic Albums Live will thrill audiences, young and old, playing all CCR’s greatest hits including “Have You Ever Seen the Rain?”. You will not want to miss the instantly-recognizable, toe tapping songs of one of the world’s greatest classic rock albums performed live on stage. You will be treated to an exact replication of the song’s as they were originally performed.

Purchase your tickets now, before they sell out!