I have a secret.

I’ve been an off-again, on-again reader of PostSecret for over a decade and a writer and storyteller for nearly as long – and my biggest concern about PostSecret: The Show was that it wouldn’t have enough story to it. After all, it’s based on lots of random anonymous lines written on postcards. How much narrative could there be? Where would the emotional arc come from? How satisfied would I be when walking away from this show? 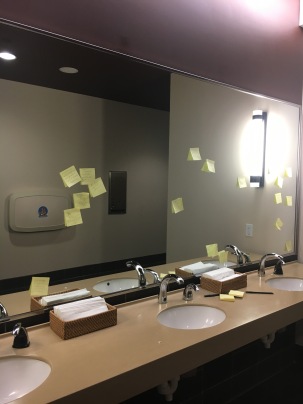 PostSecret: The Show was an immersive experience from the very start. Before the show on February 8, sticky notes bearing secrets hung on mirrors in the restrooms, paired with pens and blank pads encouraging hand washers to add their own. (My husband let me know that the men’s room had a number of secrets that read “I don’t wash my hands.”  I didn’t see any such secrets in the ladies’ room, but there were a lot of secrets about husbands.) In the theater, a large screen beckoned audience members to tweet their secrets with a specific hashtag in order to be put onscreen. A lot of “check-ins” were shared on the screen but few true secrets. To be fair, Twitter does not promise the anonymity that an unsigned postcard or sticky note does.

The show started by dramatizing PostSecret founder Frank Warren’s most memorable call while volunteering on a suicide hotline. This was done through voiceover and simple movement; it was both dramatic and moving. The story’s ending was not revealed, but the scene had an energy and a gravitas that were leading. Why might any call into a suicide hotline be memorable?

There is a quote from Oliver Twist that I’ve long treasured, “It is the custom on the stage… to present the tragic and the comic scenes, in as regular alternation, as the layers of red and white in a side of streaky bacon.” PostSecret does this beautifully, segueing from its powerful opening into a series of projected postcards about peeing in the shower. This carried throughout the night: moments of extreme tension were followed by great levity. Each postcard on the screen found murmured relatability in the audience. The secrets came in thematic waves, with some broken out and developed into story-scenes by three actors (TJ Dawe, Maria Glanz, Kerry Ipema). Some of these worked very well, showing how people were affected by secrets shared. Others felt a bit treacly and over the top, occasionally giving the sense that PostSecret was the catalyst for healing – rather than the humans behind the stories.

The show incorporated interaction throughout. Following intermission, the audience’s own secrets were read onstage by the actors. These got the biggest responses of the night: raucous laughter, shouts of encouragement, ripples of sympathy. After the show, a photographer was available to take pictures of audience members with their secrets on a whiteboard. The line to share was long!

In the end, my own fears proved unfounded. Of course, wonderful stories emerged out of mere secrets on postcards. Once a secret is shared, there’s an urge to keep sharing. The emotional arc of PostSecret:The Show builds that urge into a wave. I walked out of the show ready to dig into my inner self for something I hadn’t shared before, if only to be part of the movement. It was a truly satisfying evening of theatre – and made for great ride-home conversation!

If you are unfamiliar with PostSecret, you may want to visit the website that spurred the show now. But you should only do so if you have some time to go down an internet rabbit hole. Reading PostSecret is like overhearing a truly intriguing snippet of conversation but knowing you can’t ever have the full back story. The site was started in 2005 and bills itself as “an ongoing community art project where people mail in their secrets anonymously on one side of a postcard.” There’s something truly magical about browsing through the postcards. The reader feels a sense of familiarity and camaraderie with the writer even if the situation is new. The secrets range from mundane to scandalous, heartwarming to heart-wrenching, silly to downright horrifying. The site has received nearly 800 billion page views over the years, making it clear that people long for a window into all of these feelings.

PostSecret: The Show is looking to heighten these emotions by bringing secrets to life on stage. With the help of three actors and a guitarist, PostSecret: The Show will immerse the audience in a new level of storytelling. The actors will share anonymous secrets, both from postcards sent in by website readers and from audience members. Then they’ll flesh out the stories behind the secrets. What stories might emerge? It will depend completely on what’s shared on postcards that night, as this show changes from city to city, with each new audience supplying new secrets. If the postcards sent into the website are any indication, the show could run the gamut all the way from “I ate my co-worker’s yogurt” to “I’m having an affair with my co-worker’s wife.” Possibly relatable, possibly scandalous, definitely worth seeing!

PostSecret: The Show is at Lone Tree Arts Center for one night only on February 8 at 7:30pm. Don’t miss this opportunity to peer into other people’s lives – and maybe to share your secrets too! Tickets are available here.